Rodney Shire (1886-1994), in northern Victoria, was created on 19 March 1886, and amalgamated with neighbouring municipalities in 1994. It had an area of 1009 sq km and much of it was in the west Goulburn Valley irrigation area. The shire was west of Shepparton and contained the townships of Ardmona, Merrigum, Mooroopna, Tatura (administrative centre) and Toolamba.

The name came from that of the local county, which was probably named after Admiral Sir George Brydges Rodney (1718-92). Rodney’s naval career was mostly in the British West Indies, but his fame was probably enough for him to be commemorated in a Victorian county.

Rodney shire’s area was first administered by Waranga shire. By the 1880s the Goulburn Valley region was substantially taken up by farm selections, and irrigation was begun at Ardmona in 1886. Vineyards and small orchards had been established since the early 1870s. The United Echuca and Waterworks Trust was established in 1882, and the Rodney Irrigation and Water Supply Trust excised an area from it in 1889. When the Rodney Shire was created by severance from Waranga shire in 1886 it had a population of about 5000 persons.

Between 1900 and 1990 the relatively closely settled shire’s population increased threefold. The closer settlement irrigation projects, at first a mixture of private and trust schemes, but later guided by the State Rivers and Water Supply Commission, resulted in a great density of orchards and dairy farms between Mooroopna and Kyabram. Fruit canneries and butter factories provided employment in the main towns.

The shire was accessed from the Goulburn Valley Highway (Shepparton) and by the Midland Highway from Elmore to Shepparton. There were two railways: Melbourne to Tocumwal, via Toolamba and Shepparton (1880); and from Toolamba to Tatura (1880) and Echuca (1887).

On 18 November 1994, most of Rodney shire was united with Shepparton city, Shepparton shire and parts of Euroa, Goulburn, Tungamah, Waranga and Violet Town shires to form Greater Shepparton city.

W.H. Bossence, Tatura and the Shire of Rodney, Hawthorn Press, 1969 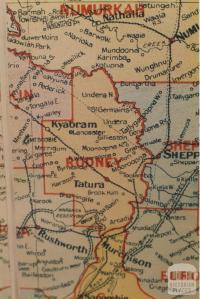