Rosebud West is a residential suburb and beach resort on Mornington Peninsula, 63 km south of Melbourne. Facing Port Phillip Bay, it is between Rosebud and Toolgarook.

Rosebud West came about from the growth of ribbon developments along Point Nepean Road, particularly during the late 1940s. In Broadbent's guide to Mornington Peninsula (1949) there were advertisements for Rosebud West for a modern store and milk bar, Leisureland furnished flats and bungalows, a general store and a cafe. 'Leisureland in Pleasureland' included tennis courts, playgrounds and a ballroom, and tradespeople (butcher, baker and milk vendor) called every day.

In the 1950s Rosebud West was made the site for a community hospital and the Rosebud high school. Later, as Rosebud gained a community of aged persons, a nursing home and hostel were established at Rosebud West. Intense subdivisional activity during the 1950s-60s in Rosebud had overlooked the provision of appropriately sited open space, and reserves were put aside in Rosebud West. The Truemans Road reserve, with a remnant wetland, is the largest of four. (Its adjoining model aeroplane area was previously the shire tip.)

Rosebud West has a small shopping centre, a foreshore reserve and beach, a public hall, a caravan park, a TAFE and Eastbourne primary school. Its census populations have been:

Leisureland on the sea, West Rosebud, 1948 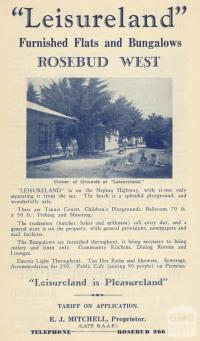