Sebastopol is a suburb of Ballarat, about 4 km south-west of the city centre.

Much of the suburb is situated on a plateau in which mining began in 1854 after the easier alluvial gold had been taken from the Ballarat gold fields during the previous three years. Several tent camps were established and the miners named the place after the Crimean War siege location, Sebastopol, (October 1854 - September 1855). Another locality, partly included in Sebastopol, was named Redan, also a place in Crimea.

Many of the miners were Welsh or Cornish. There were Sebastopol and Cambrian Hill Welsh Choirs which competed at a Ballarat Eisteddfod in 1858, a forerunner of the Royal South Street competitions. A Welsh chapel was opened in 1858, and in 1861 the Welsh Presbyterian and the Zion Congregational churches were opened. Sebastopol had an estimated population of 20,000 people.

The district’s first school (1857) was some distance south in Magpie Gully, but in 1861 an Anglican school was opened in Sebastopol. A mechanics’ institute was built in 1864, and the Welsh/Methodist influence was further enlarged with a Wesleyan church. On 1 November 1864, Sebastopol was proclaimed a borough. By then, however mining settled down to processing material from deep leads.

Despite the influence of Methodism, Sebastopol and Magpie Gully had upwards of ninety hotels licensed during 1856-70, but not all at the one time. Until 1873 there were several private schools, which were substantially absorbed by the government schools opened at Redan (1874) and Sebastopol (1873). At about this time many of the gold claims approached exhaustion, and Sebastopol’s population fell by 62% during 1871-81. Gold production actually ceased during 1883-85, but new shafts sunk in 1886 renewed production. The best days were past however, and local option polls closed several hotels in 1892. Sebastopol’s sense of separateness was debated in 1893 when a horse tram service connected it to Ballarat, and electrification of the line in 1913 probably ended any such notion.

In 1903 Sebastopol was described in the Australian handbook: 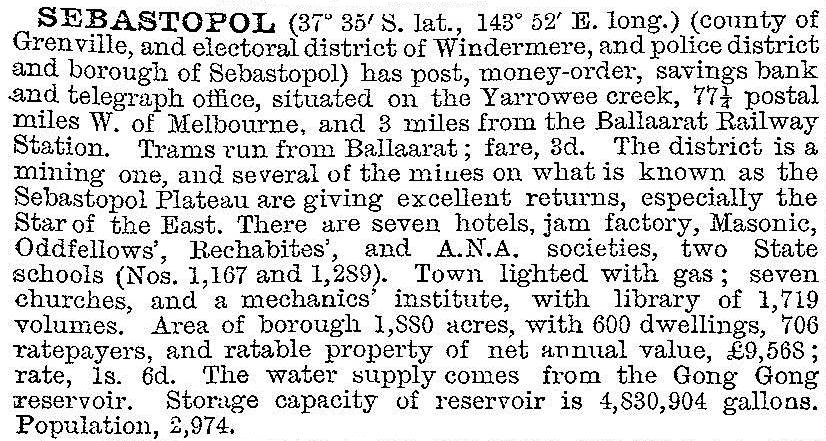 After closure of the last mine in 1918 Sebastopol entered a quiescent period with the only substantial industry being a pipe maker, with an average employment of ten workers. Even so, local churches and sporting teams retained good numbers. Renewed industrialisation and residential growth occurred after World War II. Paddle Brothers (children’s shoes) opened in 1944. In 1946 Sebastopol was described in the Australian blue book: 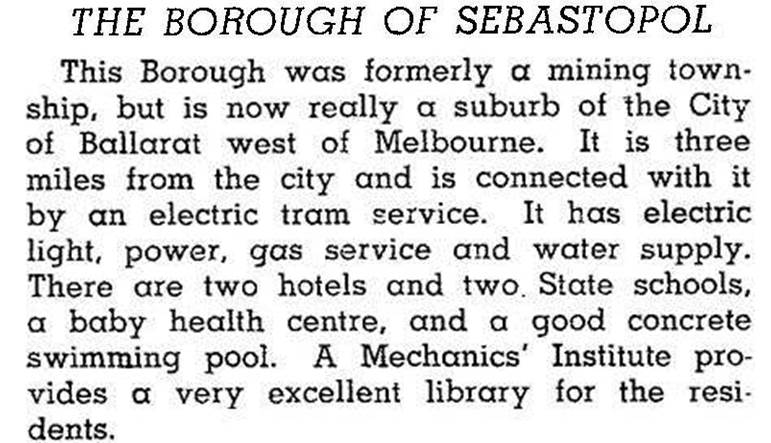 Sebastopol’s main street is Albert Street/Midland Highway, where there are the former borough offices, the main churches (including the Zion and Wesleyan churches which combined as the Uniting) and the shops. There are also two public reserves, the larger one with ovals and a velodrome, a bowling club, a swimming pool and an equestrian centre. A community centre was opened in the old Sebastopol school building in 1979, and there are two community health centres. Two hotels continue, both in Albert Street. Sebastopol primary school had 112 pupils in 2014.

Sebastopol’s eastern boundary is the Yarrawee River where there is a linear park with a walking trail. There are also two wetlands, Redan and Yuille’s. Near the latter there is also Yuille’s Station park, named after William Yuille who took up the pastoral run named Ballarat in 1838.

On 6 May 1994, Sebastopol borough was united with Ballaarat city, Ballarat shire and parts of Bungaree, Buninyong and Grenville shires to form an enlarged Ballarat city

Sebastopol’s census populations have been:

At the 2011 census, the median income of residents was 74.5% of the Australian median. The leading areas of employment in 2011 were:

Evan D. Jenkins and Arthur J. Jenkins, The golden chain: a history of Sebastopol with special reference to gold and mining, the authors, 1980 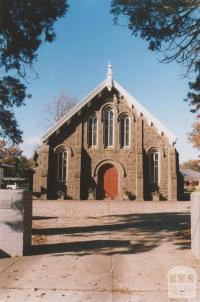