Southbank, on the south side of the Yarra River opposite Melbourne's central city area, was first defined as an area for redevelopment by the State Government in 1984. Two years later the Government published a strategy document for the redevelopment process.

Southbank's eastern and western boundaries are St Kilda Road and Montague Street. Its southern boundary is irregular in shape, but south of the Westgate Freeway. Nearly half the area was owned by the State Government or its agencies when the area was defined.

Southbank is crossed by transport routes laid out with no particular regard for Southbank itself. The reason for this is that the early routes originally traversed undesirable swamp or flat land: City Road more or less followed the track from Port Melbourne to Melbourne; the railway line (1854) followed the convenient ground from Melbourne to Port Melbourne; Kingsway was plotted to join King Street, Melbourne, to a south-eastern exit point; and the Westgate Freeway (1980s) was plotted to carry freight around instead of through the central city.

The industrial settlement of Southbank was part of the settlement of South Melbourne. Early wharves, building trades and a few noxious industries were displaced by manufacturers and warehouses. The wharves fell into disuse as port facilities were moved downstream, particularly after the low bridge joining Spencer and Clarendon Streets was opened in 1929.

The completion of the Arts Centre complex at the north-east corner of Southbank in the 1980s was followed by the Jennings Southgate development immediately westwards. Southgate ‘Arts and Leisure Precinct’ was opened in 1992 with 37 specialty shops, numerous restaurants and 67,000 sq metres of offices. It has a Yarra Bank promenade and an attractive vista across the river. It is linked to the city by a `coathanger' pedestrian bridge over the Yarra River. A Lutheran Church (1991) replaced the one nearby which was exchanged for the redevelopment.

In mid-1993 the Crown Casino was begun, replacing the temporary casino in the World Trade Centre. The casino complex was opened in 1997 and included 350 gambling tables and 2500 machines. There was a 500-room hotel, the Palladium ballroom, shops, restaurants, a 14-theatre cinema and space for over 8000 parked cars. Most of the complex ran 24 hours a day. Kings Way is bridged by the complex. A new underground railway station, named Montague, (with additional stations at Domain and Fishermans Bend connecting to the airport) was planned for the casino in 2014, with construction due to commence in 2016. The Southbank Theatre, home of the Melbourne Theatre Company was opened in 2009.

On the west side of Clarendon Street, overlooking the Yarra River, the Melbourne Exhibition Centre was completed in 1996. It has 30,000 sq metres of clear-span exhibition space. It absorbed a partially completed building for a new Museum of Victoria (1992-93), and the site contains the Polly Woodside sailing ship and maritime museum along the South Wharf. The Clarendon Street frontage contains the registered Tea House building, originally a stationer's warehouse (1888).

Elsewhere in Southbank, new buildings include headquarters for the Herald-Sun and the Australian Broadcasting Commission, office buildings converted to apartments and newly constructed apartment buildings. A notable apartments site is on the demolished Prince Henry's Hospital, nurses' home and car park. Underneath the Kings Way overpass the one time City Road primary school, later the J.H. Boyd Domestic College, became a campus of the Western Melbourne Institute of TAFE (now Victoria University).

Southbanks's census populations have been:

Southbank: a development strategy, Ministry for Planning and Environment, 1986 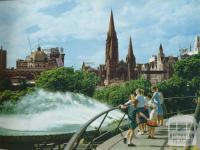