Situated in the south-east of metropolitan Melbourne, near Dandenong, Springvale is on the Princes Highway, 23 km from central Melbourne. Until 1994 Springvale was also a municipal city.

The name Springvale arose from permanent water sources for stock and travellers between Melbourne and Dandenong. In the 1850s a Spring Vale hotel was built near a newly surveyed route between Oakleigh and Dandenong, and its proprietor chose that name because of the natural springs in the area and its association with a place near the Bog of Allen in his native Ireland. The inn was located on the road to Dandenong where it intersected the track from Brighton and another running north-south, the present Princes Highway, Centre/Police Roads and Springvale Road. Notwithstanding the superficially strategic location of the land a village did not eventuate until a primary school was opened in 1867 because other centres of settlement existed in the Mulgrave area and in the opposite direction southwards.

The Gippsland railway line (1879) had a Spring Vale Road stopping place, and in 1886 sales of subdivided land occurred after rail fares had been reduced by extending the suburban fares zone from Oakleigh to Dandenong.

The subdivided land adjoined the railway station, nearly 2 km south of the hotel and school on Princes Highway. In 1887 a Wesleyan church was opened near the railway station along with the Sandown Park racecourse next to the railway line in 1891. Another primary school, Spring Vale Railway Station (now Springvale) was opened in 1907. By the 1920s the Spring Vale community had a lodge, brass band, a recreation reserve, a mechanics’ institute (1914), a few shops and some houses in the township. Kelly and Lewis, engineers, opened a factory in 1922 and Rocla Concrete opened a factory two years later. A picture theatre opened in 1924. At the outbreak of World War II Spring Vale was a pastoral, residential and industrial township with market gardens in the surrounding areas. Sand extraction industries were active, lasting until the 1990s. The change of name from Spring Vale to Springvale appears to have happened when the shire of Springvale and Noble Park was created in 1955.

The clearest indication of postwar residential growth occurred in the early 1960s when Rockman’s Shopwell department store was built, and later when shops on the east side of Springvale Road were removed for road widening. Housing growth was rapid and estates with made roads and services replaced unserviced subdivisions. The new Sandown racecourse site was opened in 1961 for both horse and motor car racing.

Springvale’s shopping centre is southwards at the junction of the railway line and Springvale Road. The city hall and library are nearby. The surrounding area’s street pattern is mostly in a grid, with a few neighbourhood reserves. There are three State primary schools and a Catholic primary school (1938).

In the late 1950s engineering firms such as Volkswagen and Robert Bosch opened factories in and around Springvale. German migrants settled there, and Lutheran church services began in 1959. The Lutheran church in Albert Avenue opened in 1962.

Springvale’s housing prices have been lower than the average for metropolitan Melbourne, and have been a means for immigrants to obtain affordable family accommodation. In 1971 the Enterprise migrant hostel was opened in Westall Road, about 1 km east of the railway station. A combination of affordability and having the hostel as an arrival address has resulted in Springvale having a high proportion of residents born overseas. In 1992 about 37% of the population was born overseas, of which 23% were Vietnamese and 8.6% Italian. Springvale municipality had the highest number of migrants who arrived during 1986-91. Enterprise became a refugee hostel, and closed in 1992.

The census populations of Springvale city were:

Springvale South (separate entry) extends from Springvale’s Heatherton Road boundary to Dingley. It is a suburb of the 1960s and 1970s and is a multiracial continuation of Springvale. The following table lists some characteristics as a proportion of the populations from the 2011 census:

G.M. Hibbins, A history of the City of Springvale: constellation of communities, Port Melbourne, 1975

Don Chambers, City of the dead: a history of the Necropolis, Springvale, Flemington, 2001 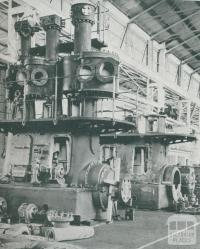