St Albans is an extensive residential suburb, 16 km north-west of central Melbourne between Sunshine and Keilor. (The boundary between these two former municipalities ran east-west through the St Albans town centre).

The town came about as a result of a land development scheme. The Cosmopolitan Land and Banking Company acquired numerous lots in the form of an original farm subdivision in 1886, comprising 512 ha either side of the railway line between Sunshine and Sydenham. The land company’s manager, Alfred Padley, made an arrangement with the Victorian Railways for assistance with the building of the railway station.

Padley insisted that the station be named St Albans, apparently derived from his grandfather’s forebears (on his mother’s side) having an association with St Albans Abbey, Herefordshire, England, since the 1500s. Padley built and resided at ‘Kieglo’, later the Presbytery of the Sacred Heart Catholic church, St Albans.

Although the land company was liquidated in 1903, St Albans became a minor dormitory suburb for growing industrial firms in Deer Park and Sunshine (Nobels explosives, McKays Sunshine Harvester factory, Wunderlichs etc.) About 700 people lived in St Albans by 1940. Development had been moderately steady despite the 1930s Depression. In 1930 St Albans had six shops, the school (1889), a hall (1906) and three churches (Anglican, St Albans the Martyr and Presbyterian, 1912).

St Albans was described in 1903 in the Australian handbook:

St Albans grew rapidly during the postwar years, particularly the 1950s, from about 900 to 7000 people. It received a heavy inflow of migrants, Yugoslav, Maltese and Italian families in particular. The Catholic Sacred Heart parish was established in 1953. Greek, Russian and Serbian Orthodox churches were also opened. Additional State schools quickly opened.

St Albans is visibly centred around the railway line, with streets laid out in a semi-circular fashion either side of it. The shopping centre is immediately to the east where Main Road crosses the line at the railway station. The crossing, notoriously dangerous, was ranked as Victoria's fourth worst in 2013, and announced for removal in 2014. Close to the shopping centre are two reserves, the St Albans market, several churches and Catholic primary and secondary schools.

St Albans extends westwards to Deer Park and the Brimbank Central shopping centre (previously Deer Park) is on its border. The land between St Albans and the Brimbank shopping centre was used for Commonwealth defence manufacturing purposes, and during the late 1990s was subdivided for housing by the Urban Land Corporation. Originally known as the Albion defence site, the housing estate was named Cairnlea. The north-west corner of St Albans became a separate suburb, Kings Park.

St Albans South (west of the railway line) has a campus of Victoria University and the Ginifer railway station (1982) named after the Parliamentary member for Keilor, Jack Ginifer.

St Albans East is all of St Albans east of the railway line. The Sunshine Western hospital is near the Ginifer station. In 1993 the Urban Land Authority designed a high density energy efficient housing subdivision, based around Magnolia Street, lowering utility costs by 30%. Further east of St Albans East is Kealba and the Maribyrnong River.

St Albans census populations have been:

St Albans has continued to be ethnically diverse. Among the languages spoken at home recorded at the 2011 census there were:

Around and about St Albans, St Albans Historical Society, 1991 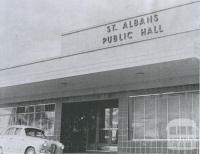