Stuart Mill, a former gold town, is now a rural village on the Sunraysia Highway, 22 km south of St Arnaud. It was part of the gold bearing country which extended northwards from Avoca.

Apart from pastoral settlement, alluvial gold was discovered there in 1861. A township was gazetted in 1865. The source of the name is variously ascribed to John Stuart Mill, a philosopher and English parliamentarian (1865-68), and a flour mill manager, Stuart Hargarty. As the mill was opened in 1872 and the town’s name was gazetted in 1865, the latter explanation is almost certainly incorrect. The former explanation might also be incorrect because the gazetted name was Stuartmill, although the spelling might have been a clerical error. It would not have been the first time.

There was a spurt of gold mine speculation at Stuart Mill which pushed the population up in 1869. Authorities vary, stating populations of between 1000 and 7500 people. Shops, houses, a Wesleyan chapel and a school (1870) were built. By 1872 activity had declined, and a quartz crushing plant was converted to a flour mill which continued probably until the 1880s. Meanwhile mining and farming continued.

Water has been a problem for Stuart Mill, and the Teddington Reservoir supply (1900) bypassed Stuart Mill for several decades, despite being only 5 km away. In 1903 Stuart Mill was described in the Australian handbook:

A Catholic church was built in 1912. Stuart Mill has a community hall, the Old Malcolm’s Inn bed and breakfast, and the Kara Kara State Park near the reservoir. The school closed in 1964. Stuart Mill’s census populations have been: 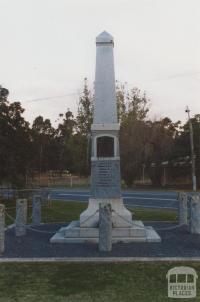