Tarranginne is rural district in north-west Victoria, 12 km west of Nhill. It is thought that the name was derived from an Aboriginal word describing a man with sore feet.

Tarranginnie was one of the many Wimmera wheatland areas opened for farm selections during the 1870s and 1880s. A sign of settlement was the opening of a school in 1879, and during the next decade there were four schools carrying the name Tarrangannie and a suffix to indicate their direction on the compass. Subsequently they were given locality names such as Boyeo and Bleak House. Tarranginnie was on the railway line to Serviceton and Adelaide (1887), and a village was surveyed in 1890.

With the growth of Nhill as a regional centre, Tarranginnie’s main commercial activity was wheat receivals at the railway yard or, later on, silos. Tarranginnie schools all closed by 1948 when pupils were bussed to Nhill.

Tarranginnie’s census populations have been:

*the locality was considerably reduced in area 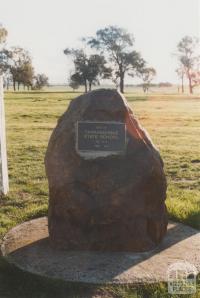