Formerly known as German Town and Hochkirch, Tarrington is 9 km east of Hamilton on the Hamilton Highway, (Hamilton to Geelong Road). Its connection with the Lutheran community dates from 1853 and land sales in the area. A congregation of the Evangelical Lutheran church acquired land during these land sales, having travelled to the area from Lyndoch in South Australia via Portland (May 1852). Central to a close collection of small farms, German Town acquired its first church in 1858-59, and appeared as Hochkirch in the 1861 census. It had returned a population of 310 residents.

Farm selections of the 1860s introduced more British settlers around Hochkirch and a hotel, the Crosskeys, a store and a post office. The local population increased to 850 only to decline to 300 in the 1870s in response to the opening of the Wimmera lands and the departure of many farming families seeking larger properties. Following subdivisions after the closer settlement acts of the first decade of the twentieth century, the population again expanded and stayed above the 200 level until the late 1960s when consolidation of properties again caused a reduction in the population.

Shortly after the turn of the century, when the town was still named Hochkirch, there was a German printing office, a German bookseller, a German Young Men's association, and a weekly and a fortnightly newspaper (both German language).

As a result of strong anti-German feeling in the Victorian community during World War I, the township name of Hochkirch was changed in 1918 to Tarrington, the name of a nearby property owned by S.G. Henty with memories of the Sussex village of Tarring from whence the Henty family originated. Even the Lutheran schools came under threat of closure because they taught German. Since the church's religious philosophy and biblical readings were then written in German, familiarity with that language represented a major component of its culture. Individual school teachers came under official investigation, and the community was the subject of debate in the Victorian parliament.

There have been three Lutheran churches: a simple timber structure (1854), a bluestone building with belfry (1863), and the present large steepled building (1928).

Tarrington was severely damaged by bushfires in 1944 when 30 homes and homesteads were destroyed together with the post office, the 1863 church and school teacher's residence. Today, Tarrington serves as a dormitory town to Hamilton, a function helped by the connection in 1972 to Hamilton's water supply. In addition to the Lutheran church, hall and school there is a restaurant in the former general store, a recreation reserve and a fire station (1992). In the early 1990s an annual German festival began. An annual hay bale art display along the highway gives the town some whimsy.

The Tarrington Structure Plan was developed in 2012-13 to guide the development of community assets and residential growth opportunities, and address waste water issues over the next twenty years.

Tarrington's census populations have been:

Charles Meyer, Nurseries of the church: Victoria's Lutheran schools then and now, the author, 1966 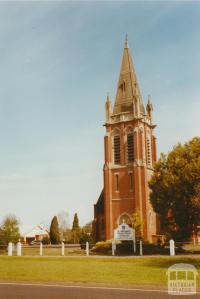