Tawonga and Tawonga South are rural townships in the Kiewa Valley, north-east Victoria, a few kilometres north of Mount Beauty.

In 1841 the Tawonga pastoral run, immediately west of the Kiewa River, was taken up by James Roberts. The run included alluvial river flats which were subdivided for farm selections during the 1870s. In 1880 a school and a hall were opened at Tawonga.

After the railway line was extended to Bright in 1890 Tawonga was within 25 km of a railhead, which was made easier when the horse track was widened to take vehicles. Livestock could be driven to Bright and dairy produce transported to there from the Tawonga butter factory (1901). The Bogong hotel was opened at Tawonga in about 1910 and was used by travellers to the Bogong High Plains and Mount Hotham. The Bogong hotel was destroyed by fire in 2011.

In 1947 the nearby township of Mount Beauty was established by the State Electricity Commission of Victoria (SEC) for the Kiewa hydroelectricity project. Tawonga South, adjoining Mount Beauty, was used, particularly the Tawonga South school (1945) for the children of SEC personnel. During the currency of the project an Anglican church (1957) and a caravan park (1958) were opened at Tawonga.

After the completion of the Kiewa project in 1961 the Falls Creek ski field was established and high plains skiing and walking increased in popularity. Ski hire and accommodation facilities have been opened in Tawonga and Tawonga South, and each place has several resort and accommodation venues. Sawmills which started in 1945-46 have, however, closed.

The census populations of Tawonga and Tawonga South have been: 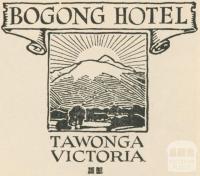 Around Mount Beauty and Tawonga South, 2008 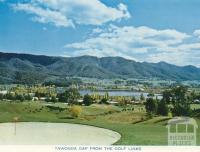 Tawonga Gap from the Golf Links 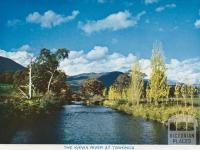 The Kiewa River at Tawonga

Mt Bogong from the Hotel, Tawonga