Thornbury, a residential suburb, is between Northcote and Preston. Its post office at the corner of High Street and Normanby Avenue is about in the middle of the suburb, 6.5 km north-east of central Melbourne. The suburb was named after the Thornbury Park estate (1883) which was named after a farm owned by Job Smith. Smith named it after a farm near his birthplace; his farm house was near the Merri Creek in the vicinity of today's Smith Street children's centre.

The sale of the house lots in the Thornbury Park estate did not find many buyers, partly because the growth of Northcote was lagging for want of public transport. A bridge over the Merri Creek for St Georges Road was not built until the mid-1880s, and the road lacked a tram service until the 1920s. High Street was less troubled, and had a cable tram by 1890 (but no railway). As a result residential growth in Thornbury favoured the High Street area, and more so when the railway line to its west was joined to the central city network in 1901-03. The Sands and McDougall directory (1912) recorded an active row of businesses on the west side of High Street, which included the Croxton Park hotel, Stott and Bastings estate agency, a post office, Moran and Cato's chain grocer's shop, a picture theatre (1911, the first in the Northcote area) and a tram waiting room. The east side was thinly developed, but had the tram engine house near Martin Street. St Georges Road was also thinly developed.

Thornbury's first State primary school opened in Wales Street in 1891, near Northcote. Population was so sparse that it closed in 1891 and stayed that way until 1903 when Thornbury began to grow. Penders Grove and Thornbury schools opened in about 1915 and by then Wales Street's enrolment was around 900. It went up to 1300 by 1927. By then the primitive picture theatre in High Street was rebuilt as the opulent Regent, and electric trams and trains were operating. Churches were established, including the Catholic presbytery, church hall (1916) and school on Thornbury Hill in High Street. There was well established housing for workers at the Glen Iris brick works, Hutton Street, west of the church.

Thornbury's public transport corridor is nearly 3 km from the suburb's eastern boundary, the Darebin Creek. In the years after World War II there was still empty land. The Housing Commission built its east Northcote estate in the 1950s-60s. Thornbury high school, east of the estate, opened in 1962 and a short way south the Northcote technical school opened in 1966. The local State primary school, Fairfield North, dated from 1925, and a Catholic primary school opened in 1953.

East Thornbury/Northcote became home for many of the Northcote municipality's Italian residents. There were also Greek newcomers and their combined percentages of the municipal population were 11.5% in 1961 and 22% in 1976. One famous settler was the Italian, Luigi Grollo, who chose a Thornbury house for his family and went on to found a dynastic building-construction firm, Grocon. He started as a concreter.

Thornbury's shopping area is along High Street ('Thornbury Village'). There are corner shops to the east and west. Thornbury's distance from west (Merri Creek) to east (Darebin Creek) is 4.5 km, which is not a compact size by inner/middle-suburb standards. It has parks and reserves along the creeks, neighbourhood reserves, a bowls club (1907) in Normanby Avenue and the large John Cain memorial park with a sports complex. It was named after Northcote's local parliamentarian and State premier. The techncial school which was next to the memorial park is now a language centre.

Thornbury's census populations have been: 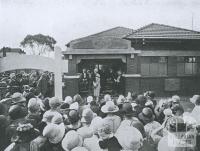 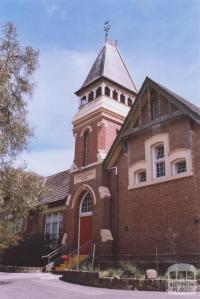