Torrumbarry is a rural village on the Murray Valley Highway, 25 km north-east of Echuca. It was named after the Torrumbarry pastoral run (1842), which was possibly a derivation of the name of an Aboriginal woman who accompanied the exploration party of the New South Wales Surveyor General, Major Thomas Mitchell, who journeyed to western Victoria in 1836.

The Torrumbarry district was mainly used for dry farming after farm selections occurred during the 1870s. Torrumbarry township was gazetted in 1874. Four schools were opened in the district in 1875-76, but two were closed by 1905. Torrumbarry is at the western extremity of the Rochester Irrigation District, supplied by the Waranga Western Channel.

More extensive irrigation followed the completion of the Torrumbarry Weir on the Murray River (1919-24) at the eastern end of Gunbower Island. The weir is about 15 km north-west of Torrumbarry village. The weir serves as a lock on the river and as storage for an irrigation system that extends westwards to Swan Hill, where the system is supplemented by Loddon River storages. The water from Torrumbarry Weir is carried by gravitation by the National Channel across the Gunbower Island to the Kow Swamp storage and to Gunbower Creek. Most irrigation water goes to dairy farming.

Torrumbarry Weir is used for watersports and is set in the Gunbower State Forest. There is a camping ground near the weir. The weir lock complex and associated structures are on the Victorian Heritage Register.

Torrumbarry village has a hotel/motel, a hall, a church and a recreation reserve. Its census populations have been:

Live and prosper: a record of progress in Rochester and district during period 1854 to 1954, Rochester Centenary Celebrations Committee, 1954 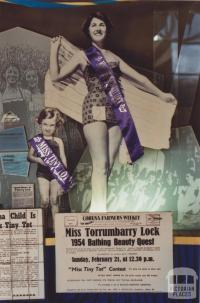