Tresco is an irrigated fruit growing area between Kerang and Swan Hill in north-west Victoria. It adjoins the Lake Boga and Mystic Park irrigation areas.

It was named after the Tresco Estate by William Cornish, who acquired the property in 1897. His father lived in Trescowe, near Penzance in Cornwall, England. Tresco homestead overlooked Lake Boga.

Long Lake, near Lake Boga, was considered to be an excellent source of fresh water. In 1912 a private venture, Australian Farms Limited, secured a licence to draw water from Long Lake for irrigation. One of the venture’s members, John Rose Gorton, was the father of future Prime Minister, John Grey Gorton, who managed an orchard at Mystic Park before World War II.

A school was opened in 1914 and a post and railway station in 1915, when severe drought caused farm losses. Salinity later caused soil problems and drainage was inadequate. The problems also beset Australian Farms’ venture at Tresco West where British Army immigrant settlers had taken up farms. 'They went tally-hoing around the country-side' and by 1924 that aspect of the settlement of Tresco West was a failure. Orchard and vineyard plantings, however, were on better drained land than at Tresco.

Most of these facilities were closed by the end of the 1980s, and the school was closed in 1992. A few of the buildings were converted to houses, but the hall (rebuilt in 1958) was knocked down in 1997 by the local council. It is a puzzling decline for a horticulturally profitable area. A handsome historical plaque has been installed.

The main crops grown are grapes and stone fruit, using water piped from the Torrumbarry system via Lake Kangaroo (also near Lake Boga). In 1988 Tresco had 130 farm holdings of which 60% were irrigated.

Tresco’s census populations have been:

Grant Angus, Between the rivers: a history of settlement along part of Major Mitchell’s line, Blackburn, 2009 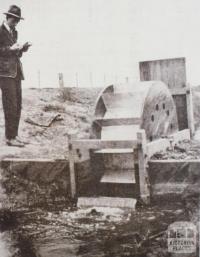