Truganina is a rural and residential suburb immediately north of Hoppers Crossing, 18 km west of central Melbourne. Its name was one of several original survey parish names and it is thought that it derived from the Tasmanian Aboriginal woman, Truganini (1803-76).

Situated on the basaltic Werribee plain, Truganina was subdivided into farm lots of about one square mile, defined by the grid like road layout. A Wesleyan chapel was opened in 1852 near Skeleton Creek (the border between Truganina and Tarneit), followed by a Baptist church (1862) and a school (1857). The school became State school 192 until 1968 when a severe grass fire destroyed the bluestone building.

Truganina’s village centre was the intersection of Woods and Doherty’s Road, where there are the cemetery (1865), a recreation reserve with a former Air Raid Precautions hall and several farm building ruins within view.

Williamstown’s Westbourne Grammar school opened a campus at Truganina in 1974 when Hoppers Crossing was in its early growth period. The campus includes an earth education centre. Across Sayers Road from Westbourne there are an Islamic mosque and college (1986). Truganina South State school (2010) was the sole government school (739 pupils, 2014), although provision for a new school was begun in 2013. The Truganina P-9 College opened to students in 2015 as well as a new Catholic primary school in Truganina South.

To the north east there are the Port Phillip men’s prison (1997) and industrial sites that adjoin Derrimut. There are shopping centres in Tarneit and Hoppers Crossing, a community centre and a single bus service. The route of the proposed Werribee-Caroline Springs rail route completely misses the present built up area but slices through the former village.

The Truganina Precinct Structure Plan was released in 2013 allowing for the development of approximately 9400 homes over 20 years bound by Leakes Road to the south, Derrimut Road to the west, Boundary Road to the north and Dohertys Creek to the east. The plan also included open space, a major town centre, two local town centres, a new train station and potential additional train station on the Regional Rail Link, local parks, sporting reserves, road and servicing infrastructure. The plan includes creation of major retail and employment opportunities associated with the Tarneit Major Town Centre, and an employment precinct along Boundary Road for office, light industrial and commercial businesses.

Truganina’s census populations have been: 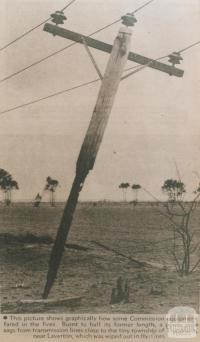