Ulupna is a rural district in central northern Victoria, 70 km north-east of Echuca and 7 km from Tocumwal, New South Wales. The name was probably derived from an Aboriginal word of uncertain meaning and was an alternate name for the Strathmerton pastoral run.

Physiographically the name is preserved in the Ulupna Creek, an anabranch of the Murray River, and the land enclosed by the creek and the river is known as Ulupna Island. The western sector of the island is a State forest reserve, and numerous Aboriginal sites have been identified in an archaeological survey (1995).

Intensified settlement began during the 1870s consisting of farming, timber harvesting and fishing. A school was opened in 1884. South-west of the island is Coonanga homestead (1866), of slab construction and comprising twelve rooms. There are original fruit trees in the ground, and the homestead is run by the Numurkah and District historical society. It is on both the Australian and Victorian historic buildings registers. Ulupna has had a hotel, a creamery and two district schools.

Before the provision of irrigation water from the Murray River, Ulupna was described in the Victorian municipal directory (1908) as a dairying district, and numerous small dairy holdings no doubt contributed to the census population of 373 persons recorded in 1911. Subsequent reductions in census figures arose from consolidation of farms and contraction of the area generally identified as Ulupna. It is now limited to the island.

Ulupna’s school closed in 1953, and the district’s census populations have been: 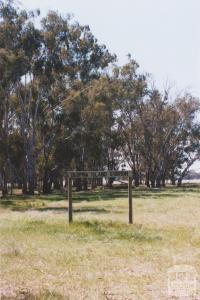