Ultima is a small rural town 30 km south-west of Swan Hill in the Mallee area, north-west Victoria. It is also on the railway line between Quambatook and Robinvale.

Ultima was the name of a pastoral run occupied between 1850 and 1892, whereupon its lease was acquired by James O’Connor who subdivided it into one square mile blocks for sale by auction. O’Connor also surveyed a private township, and all farm and township lots were auctioned in 1892. Apparently no indication was given that the lots were leasehold, not freehold.

Farmers formed a railway league in the mid-1890s, as cartage of wheat to Swan Hill was costly. Crops of up to 30 bushels an acre were harvested. The railway extension from Quambatook was opened in 1900. Scarcity of water and rabbit infestation held back development, and unsold or unoccupied land was a haven for vermin. A drought in 1902 revealed the area’s deficiencies. The most prosperous inhabitant was probably Herbert Cuttle who opened the Ultima general store in 1899. He later pioneered the development of Robinvale.

In 1904 stock water supply was available by channel, pumped from Long Lake near Lake Boga. Subsequently additional stock supply came from the Lake Lonsdale storage in the Grampians, via a gravitation channel. By about 1915 Ultima had a school (1902), a Catholic church (1911), a hotel, a coffee palace, a bush nursing hospital (1910), a mechanics’ institute, several stores and sporting clubs. The town and district population rose to over 700 persons by 1933.

Ultima railway siding was an important receiving point for wheat. Silos were built in 1942 and capacity reached 1 million bushels in the early 1950s. Oats and barley are also grown, and sheep and fat lambs are grazed for wool and meat. The township has a golf course, a recreation reserve, a public hall, an Anglican church, a second Catholic church built in 1964, several shops, a hotel, a reservoir and a school (8 pupils, 2014).

In a novel attempt to boost town numbers, in 2003 the Ultima Progress Association offered 12 blocks of land for sale for $1 on the proviso the buyer began building within 12 months. Eleven of the blocks sold.

Ultima’s census populations have been:

The first three population figures probably include the district. 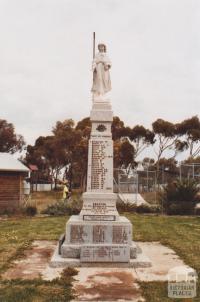