The seaside township of Venus Bay, Gippsland, is situated on the peninsula separating Anderson Inlet from Venus Bay, about 175 km south-east of Melbourne. The bay, after which the township takes its name, is thought to have been named after Venus, the morning or evening star, by George Bass on his coastal voyage of discovery in 1798. Venus Bay is on Bass Strait, and Anderson Inlet is like an inland bay, fed by the Tarwin River on its east and emptying into Venus Bay on its west.

The area was part of the Tarwin Meadows pastoral run taken up in the 1840s. After selection in the 1870s, a property named Evergreen encompassed the area. Horses were bred for the Indian remount trade. Later, cattle were grazed, then dairying established. After several changes of ownership, the land was split into smaller share farms in the 1950s.

In 1959 the Venus Bay Estate was subdivided, mostly 500 metres or more back from the surf beach. The 1500 blocks were soon sold, and during the 1960s and 1970s holiday houses were built. Venus Bay’s appeal was as a quiet place for fishing.

During the 1980s retirees were attracted to the town, which after further subdivision contains 2800 blocks. Shops are positioned around the intersection of Centre Road and Jupiter Boulevard, and the community centre is in Canterbury Road. Surf Road leads to the surf life saving club which is in the Cape Liptrap coastal park that runs south-east from Venus Bay. A caravan park, boat ramp and jetty cater to holiday makers attracted by swimming and fishing.

The Venus Bay Community Infrastructure Plan was developed in 2014 to address, among other things, visitor impacts.

Census populations for Venus Bay have been: 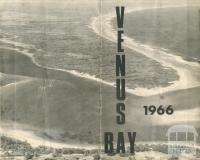