Waanyarra is a former gold mining township in the Green Valley Ranges about 7 km north-east of Dunolly and 45 km south-west of Bendigo.

The township was formed around Jones Creek where gold was discovered in 1853. The restored roadside 'Welcome Inn', built from local stone, marks the place. The settlement was known as Jones Creek, although the Government surveyor, Phillip Chauncey, named the locality Waanyarra in 1861. It is thought that the locality's name was derived from an Aboriginal word meaning flying crow.

The gold field was well known for the numerous large nuggets that were found and for the high degree of purity of the gold, 99.9%. After the initial find there were intermittent rushes, the last occurring in 1903 when some large nuggets of between 26 and 106 ounces were found.

An Anglican school and a post office were opened at Jones Creek in 1857. A postal directory recorded several storekeepers, dairy workers and a hotel in 1868. By the early 1860s, as the easily won gold was depleted, small farm holdings were taken up. Other settlers cut timber for railway sleepers, fencing and construction. Gold searching was revived in the 1930s when unemployed workers were offered small mining claims. In 1942, when there were just three pupils, the school was closed.

Waanyarra has several farms and a cemetery set in the Dunolly-Tarnagulla State Forest. A Back-To-Waanyarra celebration in 1988 attracted 300 visitors, and participants have restored the cemetery.

Lynne Douthat, The footsteps echo: impressions from Waanyarra, the author?, 1989 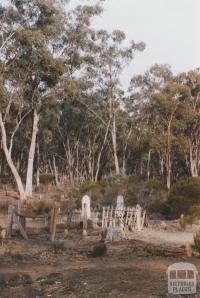 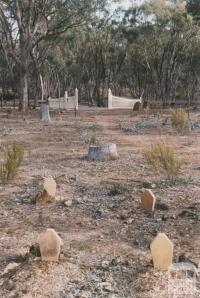