Wandana Heights is a residential suburb 6 km south-west of central Geelong, immediately west of Highton and north of Waurn Ponds. To its east is Ceres, and the Ceres Lookout and the Barrabool Hills form a westerly backdrop.

Wandana Heights was first subdivided for residential purposes in 1965, and the name was given by one of the subdivision's promoters. It is thought to be an Aboriginal word meaning to see far away.

Most of Wandana Heights was subdivided in the mid-1990s with the area west of the Princes Freeway remaining unsubdivided. It has a reserve with a hall, an oval and sports facilities, a park with a lookout tower. 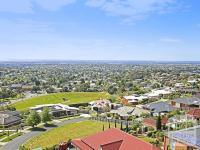