Wangaratta grew quickly after the discovery of gold in the Ovens Valley in 1852. The rail line to Melbourne and Wodonga, opened in 1873, cemented the town’s role in the economy of north-east Victoria. The Anglican Church constructed a Cathedral at Wangaratta, and the Anglican compound is still one of the city’s greatest heritage assets. The Victorian Housing Commission built housing, primarily for workers in the city’s textile businesses, after World War II. Those businesses have since closed, as has an IBM factory which operated from the mid-1980s to the late-1990s. Wangaratta remains a major regional centre, but population growth is much slower than earlier in its history.

Wangaratta is a provincial city in north-east Victoria, 210 km from Melbourne and 70 km from Albury. It is situated at the junction of the Ovens and King Rivers which flow generally northwards from the Mount Buffalo plateau and the Mount Buller area respectively.

Hume and Hovell passed through the Wangaratta area (1824) and named the Oxley Plains immediately south of Wangaratta. The New South Wales Surveyor-General, Major Thomas Mitchell, crossed the Ovens River in 1836 during his Australia Felix expedition. There is a ‘Mitchell tree’ near where Murphy Street, Wangaratta, meets the Ovens River, stated to be a place where Mitchell stopped. In the following year George and William Faithfull settled at the Bontharambo pastoral station, north of Wangaratta. In 1838 their place was taken by Joseph Docker. Docker's Bontharambo homestead (1858) is on the Register of the National Estate.

A punt for crossing the Ovens River was begun by a man named Rattray in 1838. The Hope Inn, now the Sydney Hotel at Ovens and Templeton Streets, was opened in 1840. Ovens Crossing, as it was called, formed a settlement which became Wangaratta. In 1848 the Port Phillip surveyor, Robert Hoddle, arranged for a town survey at Ovens Crossing, consisting of 11 streets and about 200 blocks. It was named Wangaratta, reputedly derived from an Aboriginal word meaning cormorant's resting place. Land sales took place in 1849-50. A primary school was opened in 1850, and the site continues as that of the Wangaratta State primary school.

The discovery of gold in the Ovens Valley in 1852 stimulated the growth of Wangaratta, as miners used the punt crossing and the bridge which replaced it in 1855. On 19 June 1863, Wangaratta was created a borough. By about that time Wangaratta had a petty sessions court, a racecourse, branches of banks and insurance companies, an agricultural society, flour mills, breweries, and Anglican, Catholic, Presbyterian, Methodist and Baptist churches. (In 1902 Wangaratta became an Anglican Diocese, and a Cathedral church was built.)

In 1873 the railway line from Melbourne to the State border, via Wangaratta, was opened. By about the turn of that century Wangaratta's pre-eminence in north-eastern Victoria was emerging – the creation of the Anglican Diocese being an example. The Australian handbook 1903, described Wangaratta: 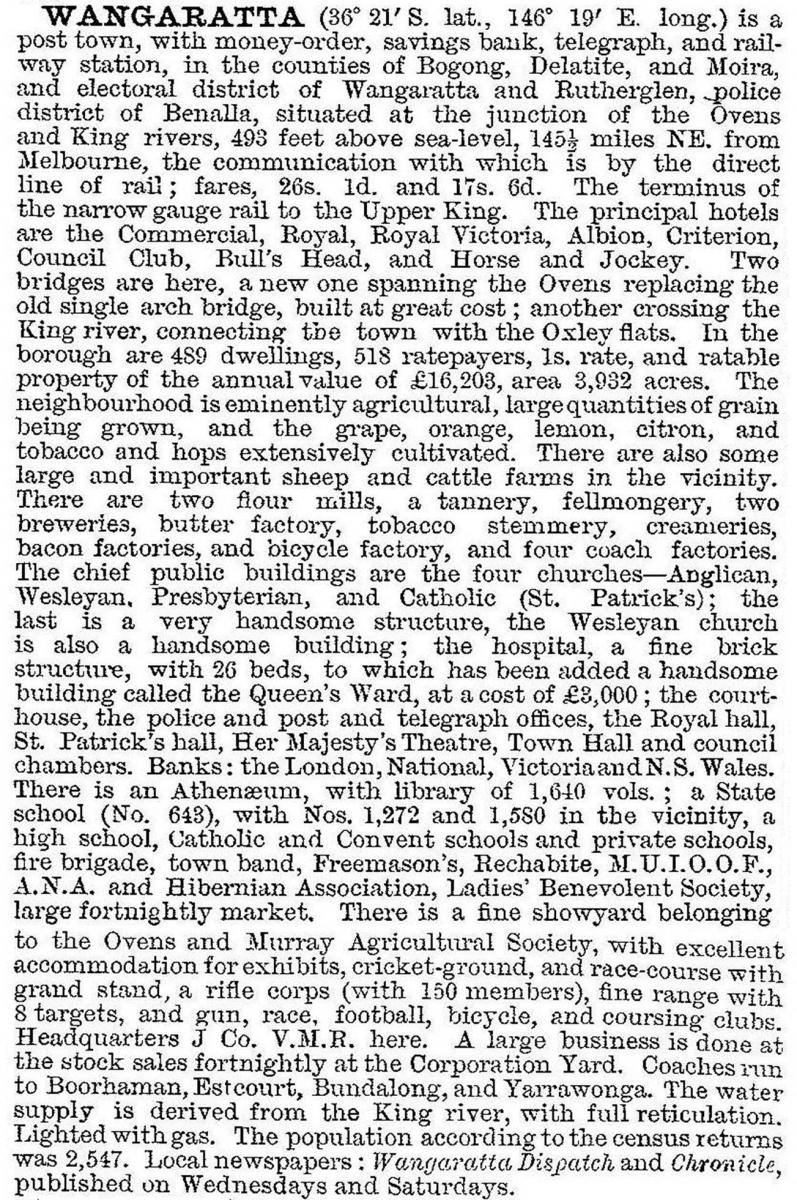 Wangaratta North or Docker's Plains was also described in the 1903 Australian handbook:

Wangaratta became a provincial retailing area for north-eastern Victoria, Callenders emporium and Osmotherly's drapery being examples. The North-Eastern Co-operative Society advertised itself as running the Greatest Store in the North East. Wangaratta also became a provincial educational centre with the opening of a State high school (1909), a Catholic technical school and a State technical school (1923). Manufacturing in the form of butter and cordial factories, a foundry and coach works was significantly diversified in 1923 when the proprietor of Callender's emporium was made the first chair of the Wangaratta Woollen Mills.

In 1942 an aluminium factory was established at Wangaratta as a war-time industry. Although the factory ceased operation as the Japanese forces retreated, the building was taken by Bruck Mills (Canada) in 1947 for rayon production. The Bruck Mills workforce exceeded 1000 at its peak. It has been a civic minded firm which has sponsored public utilities and financially assisted the building of houses. The Wangaratta borough was described in the Australian blue book 1946: 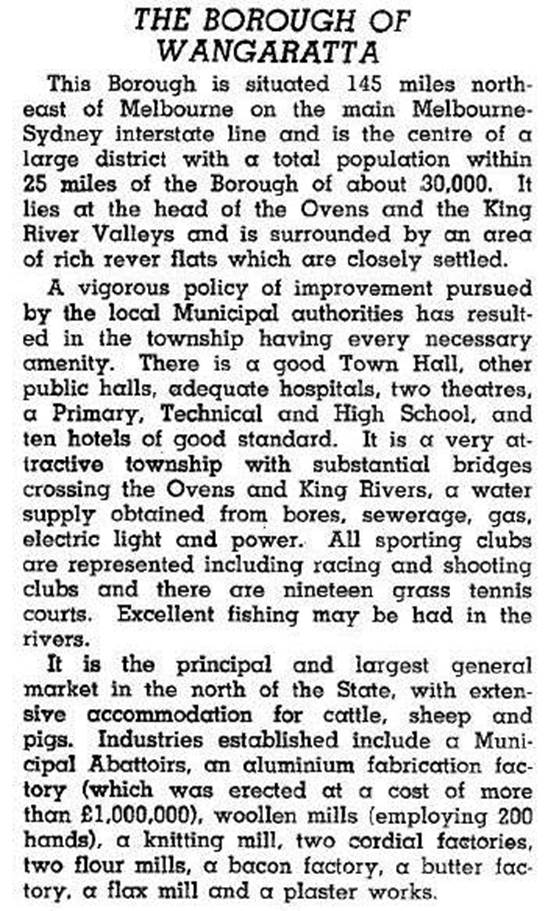 During the first 15 postwar years Wangaratta's population doubled to over 13,000 persons. Partly this was attributed to some emigration from rural centres, but a steady growth of manufacturing and tertiary employment was more significant. Housing was built by local co-operatives and the Housing Commission. The Commission's estate is south of the city, close to the textile mills. Wangaratta borough became a city on 15 April 1959.

In 1970 Yakka Overalls opened a factory employing about 250 workers. By 1988 it was estimated that the three large textile and clothing factories employed about 1300 or 70% of workers engaged in manufacturing in Wangaratta. This was a cause of concern as textile tariffs were lowered. Partly the concern was offset as employment in the tertiary sector grew.

Cutbacks in community service employment during the next ten years, however, dented this trend. Yakka closed its factory in 2000, but Bruck has diversified into specialist fabrics.

The industrial area is on the Melbourne side of Wangaratta, both sides of the Hume Highway and the railway line. An airport is further south. An encouraging addition to the manufacturing sector was a computer plant opened by IBM in 1986 and which operated successfully until the end of the 1990s.

Wangaratta's commercial and retail area is in the north-east of the built up area, and adjoins the Ovens River where the town area began. Although there are large Kmart and Coles drive-in shops, the traditional retailing strips have not had to contend with a free standing shopping centre.

Along the Ovens River there are several parklands and a camping area. There are also showgrounds, a racecourse, a trotting track and a range of sports facilities including a golf course in adjoining Waldara.

Tourism has had a significant presence in Wangaratta with hotels in the commercial area and more recent motels. By 1997 there were six hotels/motels offering 896 bed spaces. Wangaratta is 55 km from Mount Buffalo, 100 km from the Falls Creek and Mount Hotham snow fields and 40 km from the north-eastern vineyards. Local attractions include the Airworld aircraft museum and an annual festival (1990) of jazz and blues. The shopping centre has over 200 shops and in 1986 equalled the size of the shopping centre in Wodonga. Wangaratta's shopping centre had nearly one third of the retail floor space in north-eastern Victoria.

Wangaratta Woollen Mills, Textile Avenue, were acquired by Australian Country Spinners in 1991, which also includes Cleckheaton and other fibre makers.

On 18 November 1994 Wangaratta city was united with Wangaratta shire and parts of Oxley, Beechworth, Benalla and Yarrawonga shires to form Milawa shire which was later named Wangaratta Rural City.

Wangaratta's census populations have been:

The 2006 and 2011 figures included the suburb of Waldara, positioned north of Wangandary and Yarrawonga Roads.

Wangaratta: capital of north eastern Victoria, Committee of the Back to Wangaratta Celebrations, 1927

D.M. Whittaker, Wangaratta: being the history of the township that sprang up at Ovens Crossing and grew into a modern City, Wangaratta City Council, 1963