West Wimmera shire, created on 20 January 1995, adjoins the South Australian border. Its northern extremity is the southerly margin of the Big Desert/Mallee region and its southern extremity is Dergholm, in the vicinity of the Glenelg River. It thus extends in a north-south direction across an area that exceeds the Wimmera statistical region. Its easterly extremity is near Mount Arapiles. The shire was formed by the union of Kaniva shire, most of Kowree shire and parts of Arapiles and Glenelg shires, and has an area of 9116 sq km.

The shire’s northern area is crossed in a westerly direction by the railway line and the Western Highway to Adelaide, passing through Kaniva and Serviceton. The wheat/sheep farm country in the vicinity of the highway ends at the Little Desert. Immediately south of the Little Desert farm country resumes where the main town is Goroke. Further south the shire enjoys more generous rainfall and its generally flat area is dotted with lakes and swamps. Once almost exclusively pastoral estates, parts of this area were subdivided for soldier settlement farms after World War II, most notably around Edenhope. The main transport corridor is the Wimmera Highway. There is no rail service.

The south of the shire also includes Apsley and Harrow, both settlements which came about from gold escort and pastoral routes. Harrow has several registered historic buildings. West Wimmera shire’s administrative centre is Edenhope, and there is another office in Kaniva. Other public facilities are distributed as follows:

At the 2011 census, residents' religious affiliations included 21.1% with the Uniting church (Australia, 5.0%), indicating a long standing community tradition. At the 2011 census, farming accounted for 39.1% of employment among the shire’s residents. 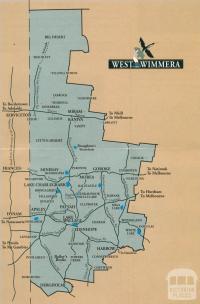