West Melbourne is generally associated with North Melbourne, as both were surveyed and proposed for sale at the same time. The dividing line between them, however, is Victoria Street and its westerly prolongation to the Moonee Ponds Creek.

In 1842 the first institution of significance constructed in the West Melbourne area was a cattle yard at the corner of Elizabeth and Victoria Streets (now the Queen Victoria Market). In 1851 a Benevolent Asylum was built between Abbotsford and Curzon Streets, straddling Victoria Street and thus partly in West Melbourne. The opening of the asylum coincided with the Melbourne Town Council's overtures for a new township to accommodate the gold-rush population influx. A site for the township was found by severance from an open-space reserve of 1035 ha that had been approved by the Governor of New South Wales in 1845. The result was a smaller reserve – now Royal Park – and a township called Parkside which now comprises North and West Melbourne. Town allotments were put up for sale in September 1852.

The western extremity of West Melbourne's subdivided area was Adderely Street. Beyond there the land was low-lying, with a lagoon about 1 km across, into which flowed the Moonee Ponds watercourse and a stream from Parkville which runs through Ievers Reserve in that suburb. The lagoon dried out in Summer, but during wet spells the vista was park-like. Albert Mattingley, the son of John Mattingley who housed his family in a tent near King and Roden Streets in 1852, wrote in 1915:

On the waters of the large marsh or swamp lying between North Melbourne and the Saltwater River graceful swans, pelicans, geese, black, brown, and grey ducks, teak, cormorants, water-hens, sea-gulls and other aquatic birds disported themselves: while curlews, spur-winged plover, cranes, snipe, sand-pipers and dottrels either waded in its shadows or ran along its margin; and quail and stone plover, particularly the former, were very plentiful on its higher banks. Many a savoury dish of wild-fowl the sportsmen among the pioneers obtained from this source, the writer among the number. Eels, trout, a small species or perch about 2 inches long, and almost innumerable green frogs inhabited its waters, and the last named on warm nights held a regular serenade that could be heard over the greater part of town.

The lagoon and the low-lying land blocked easy access to Footscray and Williamstown, obliging early travellers to ford the Maribyrnong River at Avondale Heights, before punts and bridges were provided. The Dynon or Swamp Road required frequent maintenance for westwards movement. The swamp became a foetid receptacle for waste waters from Flemington, North Melbourne and Parkville, and in 1879 it was drained and filled. The North Melbourne railway yards occupy its northern area. In the 1930s Depression its southern area, near the outfall of the Moonee Ponds Creek, was the notorious Dudley Flats, where impoverished people scrounged building material from the land-fill tip to build shelters and huts.

Being on the edge of a booming Melbourne, West Melbourne was quickly inhabited. Presbyterian and Catholic church services began in the early 1850s, and in 1854 the first church was built on the Catholic reserve in Victoria Street. By the end of the 1860s there were also Primitive Methodist, Methodist New Connection, Anglican and Baptist churches. The Baptist church (1866) at Hawke and King Streets (now a small grassed reserve), was for many years one of the most important Baptist congregations in Melbourne. A school was opened in King Street in 1853. It was replaced by a State school in 1875 at the corner of King and Roden Streets. The building is on the Victorian Heritage Register, although the school closed in 1992.

The dominant building in West Melbourne, however, came to be a church, St Mary's Star of the Sea, on the brow of a hill in Victoria Street. Built of Barrabool sandstone to a French Gothic design it is a testament to the money-raising capacity of the large Catholic congregation. Built between 1891 and 1900 it came after the presbytery and before the adjoining St Mary's co-educational regional school.

The railway yards were completed by the end of the 1880s, providing a significant source of local employment. Flour mills and wool stores were opened, served by railway sidings. The residential component of West Melbourne, however, was mostly displaced by expanding industry on the edge of the central city area, although several row houses and individual dwellings were identified in a conservation study in 1983 as being of significance.

In 1913 an Anglican church was constructed in King Street, West Melbourne, opposite the Flagstaff Gardens. It was Melbourne's first Anglican church, St James' Old Cathedral (1842), transferred from the corner of Williams and Little Collins Street. The Flagstaff Gardens are in the West Melbourne postcode area, and are an elevated point which has served as Melbourne's first cemetery, an observatory, as a telegraph station and a quarry. In 1873 it was reserved as a public garden. In addition to monuments for the proclamation of separation from New South Wales in 1850 and for the old pioneers' cemetery, the gardens have a bowling club and tennis courts which are increasingly used by workers from city high-rise offices.

Another well-known building in West Melbourne is Festival Hall. It was built by John Wren in 1915 and became metropolitan Melbourne's main venue for boxing and wrestling. Rebuilt in 1956 after being burnt down the year before, it was the Olympic Games venue for gymnastics and wrestling. In the 1950s and 1960s it became an entertainment centre, with famous appearances including Bill Haley, Frank Sinatra and the Beatles. By the 1990s it had been overtaken by more spectacular venues, but the Wren family remained in ownership.

Although the State primary school closed in 1992 the Catholic school near the Star of the Sea church was enlarged to become the Simmonds Catholic Boys' college. It constitutes one of four Catholic school campuses in North and West Melbourne.

The Queen Victoria Market west of Queen Street is in West Melbourne, consisting of open sheds, a few shops, a car park and former Market offices. The sheds sell mainly textiles, clothing, footwear, fruit and vegetables. The Market is discussed under Melbourne.

West Melbourne's census populations have been: 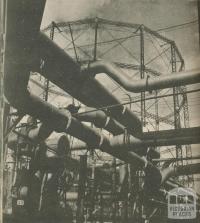