Western Port is a loosely defined region around Western Port Bay, generally 75 km south-east of Melbourne. Its name was given by the explorer, George Bass, in 1798 when he entered what he thought was the bay most westerly from Port Jackson, New South Wales. The name is often expressed as one word, Westernport.

The bay encloses two islands, Phillip (named by Bass after Governor Arthur Phillip) and French (named from an adaptation of Isle de Francais, the name given by its European discoverer, Nicholas Baudin, in 1802). Phillip Island is the nearer to Bass Strait. The French activities provoked a short-lived British settlement at Sorrento on the Mornington Peninsula, west of the bay, in 1803. Twenty three years later another alarm about possible French incursions provoked a settlement at Rhyll, Phillip Island, and it was transferred to Corinella on the eastern side of Western Port Bay. It lasted about one year.

Apart from sealing parties, permanent settlers in the Western Port region were Samuel and Hugh Anderson who took up a grazing site at Bass in 1835, the year Batman and Fawkner settled at Melbourne. Other settlers occupied the Mornington Peninsula within a few years. The northern shoreline of the bay was not taken up for grazing for some years because of its generally swampy condition, although it was found to be good in parts for summer grazing.

The western shoreline of the bay is the Mornington Peninsula. Between that shoreline and the coast of Phillip Island there is the western channel, the main sea route to Western Port and the deep water harbour at Hastings. There are recreational and surf beaches along the Mornington Peninsula until the bay reaches French Island, and beyond there the shores are fringed with mangroves and tidal flats. That condition continues around the north of Western Port Bay, creating an environment of considerable biodiversity. It is listed on the Australian heritage register.

Since the 1970s seagrass beds in the north of the bay and around French Island have been degraded, with a consequent effect on fish populations. It is thought that toxic stream waters have been the cause, from poisons used to clear weeds from Koo Wee Rup drains and plant sprays on market gardens.

Only minor streams enter the bay from Mornington Peninsula. Two main streams, the Bunyip and Lang Lang flow into the north-east of the bay and a third, the Bass, flows into the east, between Corinella and San Remo. The streams that enter the north of the bay were originally suppressed by the Koo Wee Rup Swamp, a vast area of peaty soil that was drained in the 1890s. It has become a highly productive dairying, grazing and market garden area.

The notion of a Western Port region relates to the western shoreline around Hastings and Crib Point, chiefly brought about by the adjoining water. The naval fortification of Port Phillip Bay at Point Nepean and Queenscliff in the 1880s to 1890s caused defence authorities to consider the possibility of invasion through Western Port. A railway line was built to Crib Point in 1889 for the rapid movement of troops from the Langwarrin military reserve. In 1912 work was begun on a naval depot at Crib Point and it was officially opened in 1920. It is named HMAS Cerberus.

During the early 1960s the Hastings shire council promoted the prospect of a deep water port, and the discovery of oil and gas in Bass Strait provided a role for Hastings in the treatment and distribution of those products. The Western Port industrial region held out prospects as a Ruhr of the south, but an oil spill and the likely discharge of coolant water into the bay alerted environmentalists to the risks to the coastal habitat. Speculative land subdivision mania around Hastings did not endear industrial interests to the environmental lobby. Although Hastings, Crib Point and Tyabb experienced considerable population growth, much of the workforce finds employment in the direction of Melbourne.

Western Port’s industrial region denotes only one of several activities in the area. There is recreational boating and fishing in the bay’s 680 sq km of water, and some commercial fishing, mainly from out of Phillip Island. The island is also a recreational and holiday place with important tourist attractions at the penguin rookeries and Seal Rocks. French Island (170 sq km) on the other hand has a declining rural population, and is linked to the protected areas in the north of the bay by being listed on the Australian Heritage Register. On the bay’s eastern shoreline there are grazing and dairying in the Gippsland hills. On the western shoreline there are beaches and weekend/holiday areas at Flinders, Shoreham and Merricks. These places merge into the hills of the Mornington Peninsula which have various rural uses, including wine grapes and a small amount of orcharding. 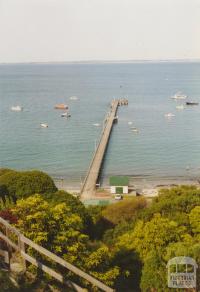