Westgarth is a residential locality where the tram and train services cross the Merri Creek, south of Northcote, 5 km north-east of Melbourne.

Land sales occurred in Northcote in 1840, but the land between Westgarth Street and the Merri Creek was withheld, probably as a reserve for a township in view of its proximity to water. In 1853 a township was gazetted, to be called Northcote. The cross streets, Cunningham, Urquhart and Walker, were named after three of the purchasers in the 1840 land sale. The northern-most Westgarth Street was named after William Westgarth (1815-89), merchant, politician and historian of colonial Victoria. Between 1845 and 1854 he owned land on the other side of Merri Creek. Northcote by the Merri Creek, however, did not attract settlement as quickly as the more elevated Ruckers Hill up High Street, which was the place to which the Northcote name migrated. Northcote-by-the-Merri became Northcote South.

The village, however, attracted some settlement, notably All Saints Anglican church (1860) and the Bridge Hotel (1864). The present church was built in 1870. To the west of the village the Jika Jika reserve was set aside, later to be Northcote Park and home for the Northcote Football Club.

A railway line was opened in 1884 from Clifton Hill to Alphington, via Northcote South. Four years later it was linked to Melbourne, although by a circuitous westerly loop that terminated at Spencer Street. Two years later the High Street tramline opened, only to close twice before reopening permanently in 1901. During the period 1906-10 the railway station was named Westgarth, and the area took on that name.

Being only a short way beyond Clifton Hill, and having rail and tram services, Westgarth was eminently suitable for residential settlement by the turn of the century. Its housing is mostly Victorian and Edwardian, with a smattering of California bungalows. By 1912 a shopping strip was well formed along High Street between Westgarth and Union Streets. The tram and the train cross the Merri Creek on tall viaduct bridges.

Westgarth's most notable building, and one of Melbourne's most durable picture theatres, was opened in 1920. It ran as a suburban cinema until the 1970s, when it was used for showing Greek films. From 1976 to 1996 it was the Valhalla, a mecca for art films and film buffs, including the long-running Blues Brothers film nights where patrons dressed as look-alike Blues Brothers. In 1996 it renewed life as the Westgarth Cinema.

The railway station immediately after Westgarth is Dennis. William Henry Dennis purchased land in Northcote in 1856, lived there by 1868, managed a Northcote store yard and was a local councillor from 1872 to 1904. He was mayor in 1884-85 and 1902-03, and active in the local Methodist Church and Sunday School for at least as long. Dennis railway station was opened in about 1924.

Westgarth ranks with Ruckers Hill in Northcote in terms of desirable real estate.

Andrew Lemon, The Northcote side of the river, City of Northcote in conjunction with Hargren Publishing, 1983 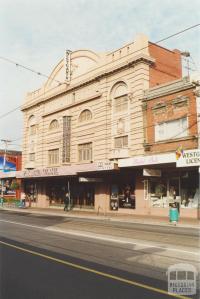