Westmeadows contains the original Broadmeadows village on the Moonee Ponds Creek, which is west of the present Broadmeadows. It is north of Tullamarine/Gladstone Park, and is 17 km north of central Melbourne.

The first Broadmeadows township was laid out by a Government survey in 1850. Audlie Street was its commercial centre with a hotel, the police station and the shire office (1866). The Anglican church was opened in 1850 a little to the east, and a school begun the following year. The present primary school site dates from 1870. The shire offices and a bluestone bridge over the Moonee Ponds creek are on the Register of the National Estate.

Broadmeadows township and the urban centre began to be moved 2 km eastwards when the railway line and station were opened in 1872. Shire loyalties clung to the old township until new civic offices were built near the railway station in 1928.

The Housing Commission began the building of a 2226 hectare estate in the Broadmeadows area in 1949. Not until 1975 did it begin building in the vicinity of the old township, which it called Westmeadows Heights. Between 1975 and 1979 it built over 900 houses in the area. To the north of Westmeadows is the east-west flight path for the Melbourne International Airport, Tullamarine. The land under the flight path has been kept undeveloped and its eastern part is the Broadmeadows Valley Park. It contains two streams which flow into the Moonee Ponds Creek. Nearby is the Erinbank housing area which had a primary school (c1976) and a secondary college (c1978), but with a proposed freeway reserve bisecting it. Westmeadows has a public hall, the Westmeadows tavern and a few corner stores, and more extensive shopping requires a journey to the Gladstone Park or Broadmeadows shopping centres. There is a linear park and a walking trail along the Moonee Ponds Creek.

To the west of Westmeadows is the Tullamarine hazardous waste land fill site.

Westmeadows' census populations have been: 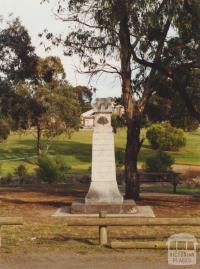 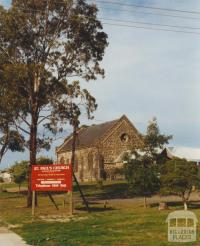