Wheelers Hill, between Glen Waverley and Scoresby, is a residential area 22 km south-east of central Melbourne. Its origin was a farm taken by a John Wheeler near Ferntree Gully Road, extending eastwards to the Dandenong Creek (the present boundary of Scoresby). The prolonged rise along which the road runs gave the area its name. A hotel was constructed at Wheelers Hill where Ferntree Gully Road crossed Jells Road. Ferntree Gully Road was an access road to the Dandenong Ranges. It was also the site of the Mulgrave post office. To avoid confusion with the village of Mulgrave to the south-east, the post office was renamed Wheelers Hill in 1888.

In common with the surrounding district Wheelers Hill was a farming community. An Anglican church was opened in 1869 and a Presbyterian church in 1891. The hill was an attraction for early motoring rallies and hill climbs, motor cars in 1905 and motor cycles in 1911.

The population of the Wheelers Hill area was rural until well into the 1950s, as there was ample land available for postwar housing westwards, particularly along the railway line to Glen Waverley. Although Wheelers Hill was in a municipality that was predominantly urban in character, it was described in 1970 as being a mainly rural area with some lovely home sites and reached by an infrequent bus service from the Glen Waverley station. The late 1960s, however, saw Wheelers Hill's urbanisation, spreading east from the Brandon Park shopping centre (1970) at the corner of Springvale and Ferntree Gully Roads.

The hotel at the corner of Ferntree Gully and Jells Road (substantially changed in 1929) remains a prominent feature and the drive-in community shopping centre is a few hundred metres to the south. Between them is the Monash City Gallery and gardens. In the 1960s Wheelers Hill was a locality on the edge of Glen Waverley, but by 1988 it was an irregularly shaped suburb extending from Springvale Road to Dandenong Creek and (north to south) Waverley Road to Wellington Road. Its State schools have been: Brandon Park primary (1971), Waverley Meadows primary (1975), Wheelers Hills primary (c1974), Jells Park primary (1979) and Wheelers Hill secondary (c1980).

A notable feature of the area is Jells Park which lies between Wheelers Hill and the Dandenong Creek, occupying about 4 km of the creek valley. It includes the Waverley Womens’ Sports Centre, Jells Lake and extensive walking trails. Elsewhere in the residential area there are several neighbourhood parks. Most of the residential streets are configured so as to avoid unnecessary through traffic.

Wheelers Hill’s census populations have been: 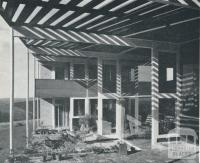