Whroo was a gold mining township in northern Victoria 7 km south of Rushworth and 10 km south-west of the Waranga Basin reservoir. The name is pronounced ‘roo’, and is thought to be derived from an Aboriginal word meaning lips. The word refers to a small, natural basin in the hilly terrain which held spring water. It is about 400 metres south-east of the Whroo cemetery.

Gold was discovered at Whroo in October 1854, the year after the discovery at Rushworth. The location of the find was named Balaclava Hill, as it coincided with the battle of Balaclava at the Crimean War. Balaclava Hill was a very rich field, and was later mined by open cut. The early rush brought thousands of miners to Whroo, but within 4 years the population had dwindled to about 450. The township was surveyed in 1856.

One of the gold miners, John Lewis, became a leading citizen of Whroo, donating the land for the first school (1857), helping to finance the first Anglican church and ultimately becoming Waranga shire’s president. Lewis was a shareholder in the Balaclava mine, and his fellow shareholder, Archibald Menzies financed Melbourne’s Menzies Hotel (1867) from the mine’s profits.

By 1865 Whroo had a steady gold mining industry and included a mechanics’ institute and library (1859), Presbyterian and United Methodist churches, three hotels, a cordial factory and three ore crushing mills.

In 1903 Whroo was described in the Australian handbook:

Whroo’s long term gold mining was confined to Balaclava Hill, which was mined until the 1870s. Other small mines were worked until the turn of the century. By the 1920s wood cutting from the ironbark forests around Whroo was the main local industry. Shopping was done in Rushworth, locals kept the church in repair, and the school was closed in 1933. The mechanics’ institute building was sold in 1955 to be used as a barn at nearby Baillieston.

Baillieston, 15 km south of Whroo, was also a gold mining settlement, having a hotel, general store and school. The school closed in 1943. Like Whroo, Baillieston’s site is marked by remains of mining operations and ruins of buildings. Reedy Lake, a few kilometres east of Baillieston has many recorded Aboriginal artefacts, marked trees, fire places and mounds.

Whroo’s former township site is in the hilly Rushworth State Forest, marked by many tracks and old gold workings. A picnic area is near the former township, and there was an information centre in Reedy Creek Road. 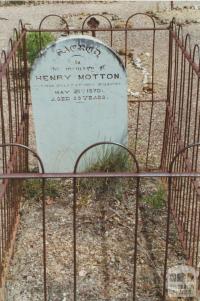