Wickliffe is a rural village on the Glenelg Highway between the small towns of Glenthompson and Lake Bolac and is 65 km east of Hamilton in the Western District.

In 1840 John Dixon Wyselaskie, born of Polish parents in Scotland, took up the Narrapumelap pastoral run in the Wickliffe district.

The track which preceded the Glenelg Highway crossed the Hopkins River at a convenient ford. An inn was opened by an Irishman, Farrell, at the crossing in 1843 and the place was known as Ford’s Crossing, Hopkins Crossing and Farrell’s Inn. By 1850 it was known as Wickliffe Government Township, possibly at the behest of Wyselaskie.

A school was opened in 1858 and a substantial bluestone Presbyterian church was built in 1861. By 1860 Wyselaskie had acquired a property of 105 sq km, and in 1878 built the Narrapumelap homestead. He also built Wickliffe House in the Melbourne suburb of St Kilda. Balliere’s Victorian gazetteer (1865) recorded Wickliffe as having a post office and a court, and being set in good pastoral country which was well timbered and with numerous lakes. There was also the Hopkins Hotel.

The Wickliffe area consisted mainly of large pastoral holdings, and was described in the Australian handbook in 1903:

After World War II part of the Narrapumelap estate was subdivided for 22 soldier-settler farms. Despite the establishment of more farms, the school was closed in 1987. Wickcliffe has a reserve, a Uniting church (formerly the Presbyterian building, with a spire added in 1878) and a hotel. Narrapumelap homestead is on the Australian and Victorian heritage registers.

The Wickliffe Community Action Plan was first produced in 2001 with a revision in 2006-09, using the town slogan 'Wickliffe – stop and experience our natural beauty'. Priorities included the beautification of Wickliffe with native plants, creating a garden setting and upgrading the recreation reserve facilities, among other things.

Wickliffe’s census populations have been: 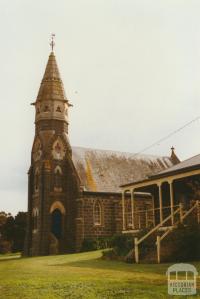 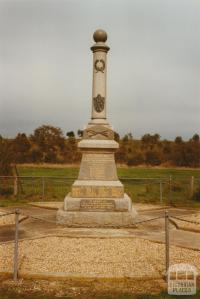