Bridgewater is rural township on the Calder Highway where it crosses the Loddon River, 35 km north-west of Bendigo.

The township began as a settlement for miners at Inglewood, 6 km away, because the water at Inglewood became unsuitable for drinking. Within two years of the settlement occurring a bridge (1862) was built across the Loddon River at Bridgewater.

A post office was opened in 1868 and a school in 1871. In common with many country towns a flour mill was opened in Bridgewater in 1874, but the Bridgewater mill is most unusual in that it has continued until the present day after rebuilding and several expansions. It is one of Victoria’s five operating mills, the others being in Ballarat and metropolitan Melbourne. Lewis Jones, in his definitive surveyed of Victoria’s flour mills considered that the Bridgewater mill’s survival has rested on the loyalty between employees and the owners, with several generations of some families having worked at the mill.

Bridgewater’s early development was assisted by proximity to the river, as dairying and a cheese factory (1886) supplemented sheep grazing and cereals. A railway station was opened on the Bendigo to Inglewood line (1876) and a mechanics’ institute was opened in 1880. In 1903 Bridgewater was described in the Australian handbook:

Several sporting clubs were established, including golf (1921) and tennis (1926). A memorial hall of grand proportions was opened in 1923, serving as a picture theatre and social centre. Earlier Catholic and Anglican churches were replaced in 1926 and 1929 respectively, and they are also well proportioned buildings. Reticulated water was laid on by a local trust in 1928 and electricity from the State grid was turned on in 1940. Four steel silos of total capacity 280,000 bushels were built near the railway station in 1963 for holding wheat, barley and oats. The flour mill had silos with a storage capacity of 500,000 bushels in 1970. In 1972 the WaterWheel vineyard and winery was established next to the WaterWheel flour mill.

Bridgewater has a golf course, tennis courts, recreation reserve, bowling greens, a caravan park beside the Loddon River, a hotel and motel, three churches and a school (30 pupils, 2014). A temporary desalination plant was opened in 2009 to reduce the salt level in the water supply.

In September 2010 and again in January 2011 many parts of regional Victoria experienced widespread severe flooding. In Bridgewater the Loddon River flooded homes and businesses including the hotel, post office and caravan park. The police station was flooded and roads severely damaged. Flooding destroyed the green at the local bowling club and damaged the clubhouse.

Bridgewater’s census populations have been:

Lewis Jones and Peggy Jones, The flour mills of Victoria 1840-1990: an historical record, The Flour Millers’ Council of Victoria, 1990

Mulwarrie (a town on the river): a history of Bridgewater-on-Loddon township and district, 1836-1971, Back To Bridgewater Committee, 1971 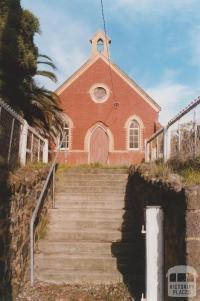