Brunswick West is a residential suburb 6 km north of central Melbourne. It lies between the Moonee Ponds Creek and central Brunswick with the Royal Park lands at its southern border.

It was the last area to be settled residentially in the former Brunswick municipality, being somewhat remote from north-south public transport services. Settlement in fact predated the opening of the Melville Road tram line in 1925-27. The area's first primary school, west of Hoffman's brickyard, opened in 1888.

An early, although unsuccessful, residential subdivision was in the north-west, at the Hopetoun Estate in 1892. Ten years later another area came under a State Government Closer Settlement Scheme, attracting about 200 residents. It was named Moonee Vale. The south-west was more attractive, being closer to Melbourne and less flood prone. Subdivision lots were larger then in Brunswick central and Brunswick East, and the predominant house design was the Californian bungalow.

The last area to be subdivided into its present allotments was the Closer Settlement area at Moonee Vale, during the 1940s and early 1950s. Cream bricks and flats dot the postwar landscape. During the 1950s Greek and Italian migrants moved into Brunswick West. The present brick church (1959) was built to accommodate the bigger congregation.

Brunswick West has an array of linear parks along the Moonee Ponds Creek, but some of them must be reached by crossing the Tullamarine Freeway along the creek valley. There are two small reserves along an unused railway reservation and the large Dunstan Park with ovals. Grantham Street also has a drive-in shopping centre, Union Square.

Brunswick West has higher median house prices than the easterly parts. The prices have also risen faster than the metropolitan average, reflecting the suburb's gentrification during the late 1980s and the 1990s. In 1987 Brunswick West's median house price was a shade under metropolitan Melbourne's, and in 1996 it was 144%. Although most of Brunswick North's houses are post World War I, there is a surviving gentleman's estate house, Whitby (c1850) in Whitby Street, near Ferry Crescent. It is listed on Australian and Victorian heritage registers.

Brunswick West's census populations have been: 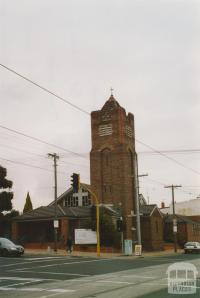