Clayton is a residential and industrial suburb 18 km south-east of central Melbourne on the Oakleigh to Dandenong railway line.

The area was first occupied for farming purposes in the 1850s. The first township was on Dandenong Road where Clayton North is now situated. The construction of the railway line about one kilometre south of Dandenong Road in 1878 prompted the start of a second township where the line crosses Clayton Road. The origin of the name, however, is from a property near the station, Clayton Vale, owned by John Clayton during the 1860s-70s.

In 1862 a primary school was opened at the corner of Dandenong Road and Clayton Road, to serve the whole of the Clayton district. It was renamed Clayton North in 1954 when another primary school was opened closer to Clayton central. Clayton's rural lands and relative proximity to Melbourne attracted two institutions at the turn of the century: the Talbot Colony for Epileptics on land later occupied by Monash University, Clayton North, and a Women's Convalescent Home. Apart from that the community consisted of farms, three hotels, two churches, a tennis court and a few shops. Market gardens, fruit growing and a municipal abattoir were the leading industries. Clayton had a brief description in the 1903 Australian handbook:

Attempts at residential subdivision awaited successful sales until after World War II, and the flat land with stable soil conditions attracted manufacturing industry. Several large manufacturing plants were established in Clayton in the post-war years including Dulux Paints, Cheesborough Ponds, two bakeries and a cable maker. At the extreme eastern edge of Clayton a railway-carriage works was operated, prompting the building of the Westall railway station for the workforce. The factory site later became the Volkswagen assembly plant, and subsequently Nissan, before closing down.

The 1960s saw the rapid disappearance of market gardens as urbanisation advanced. At the western edge of Clayton the Oakleigh high school had been opened in 1955 and a second primary school was opened next year at Clayton South. Melbourne's second metropolitan university, Monash, was opened at Clayton North in 1961. Primary schools at Westall and Clayton West opened in 1961 and 1962, and high schools at Westall and Monash (Clayton North) in 1963 and 1965.

The railway station (c1891) and the Clayton North school building (1909) are heritage listed.

Clayton North is dominated by Monash University and a CSIRO facility. There is a small shopping centre opposite the primary school in Dandenong Road. In Clayton, near the railway station, there are the Monash Medical Centre, an active strip shopping centre and a large community centre and library. Construction of the Monash Children’s Hospital began in Clayton in 2014. The St Peters Catholic School (1954) is near the station. Numerous factories, including Wilke Printing, Robert Bosch and Repco are nearby. Clayton South and Westall are closer to the ‘sandbelt’ areas, with the Spring Valley Golf Club and two large reserves. Sanitary landfill sites occupy former sand quarries.

The Australian synchrotron facility was built on land adjacent to Monash University in Blackburn Road and operated from 2007 producing light beams to look at the structure of materials at the cellular and molecular levels. Securing ongoing funding for the facility has proved challenging.

Census populations for Clayton and Clayton North have been:

May Keeley, A journey into yesterday: history of Clayton, 1980 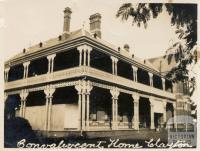