Epsom is a developing outlying northern suburb of Bendigo on the Midland Highway. It adjoins the White Hills district of Bendigo, and both places were first mined for gold during the 1850s.

Epsom was probably named after the horse racing town of Epsom Downs, Surrey, England. The Bendigo racecourse is nearby. Later, when the railway line was built north of Bendigo, the area separated from Epsom by the line was named Ascot, also an English horse racing place.

Epsom is situated on the junction of the Bendigo and Piccaninny Creeks, and the alluvial soil was a source of agricultural produce for the gold diggings. As the ground was overturned for gold it revealed good pottery clay. An immigrant, George Guthrie (1828-1910) opened Epsom’s best known industry, Bendigo Pottery, in 1858.

Guthrie’s pottery coincided with the opening of religious and civic institutions at Epsom, an Anglican school (1856-81), a Catholic school (1856-76), a Wesleyan church (1859) and a police station (1862). Gold mining was the main industry of the 1860s, with 16 crushing mills and 12 horse puddling machines, and remained so until the late 1880s when the diggings were nearly all worked out. Selectors took up farms, including vineyards and orchards.

In 1903 Epsom was described in the Australian handbook:

Epsom was an agricultural and industrial town until after the 1950s. As the iron foundry gave out market gardens supplied tomatoes to a pulp processing factory. Throughout all of Epsom’s industrial history, however, the Bendigo Pottery has continued. Until the 1930s the pottery manufactured household wares, pipeware, bricks, tiles, bottles and demijohns. During subsequent years pipework became more important for sewerage schemes. By the 1950s plasticware overtook much of the ceramic houseware and the pottery remained technologically unadvanced. In 1968 the possibility of reintroducing household pottery was taken up, and the new era of handmade Epsomware began. Tourism soon followed. The former stables became a pottery gallery, and along with the kilns and other structures were placed on the Australian and Victorian historic buildings registers.

Epsom has market gardens and poultry farms, a large Sunday market, a school (198 pupils, 2014), a caravan park, a public hall and a sports centre. A new housing estate was constructed behind the Epsom Village shopping centre. In 2014 work began on the construction of a new railway station at Epsom, connecting the northern suburb to Bendigo with regular train services.

Epsom's census population have been: 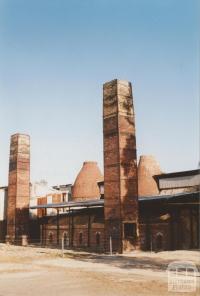