Greater Bendigo city was formed on 7 April 1994, by the union of Bendigo city, Marong rural city, Eaglehawk borough, Huntly shire and parts of McIvor and Strathfieldsaye shires. Its area is 3000 sq km.

Access from Melbourne is via the Calder Highway, the Northern Highway (via Kilmore and Heathcote) or by the railway line to Bendigo and Echuca.

The main urban areas are Bendigo, Heathcote, Elmore and Huntly.

The Coliban and Campaspe Rivers flow through the municipality. Upstream (that is, southwards) the Coliban water storage system is a main supply source for Bendigo for domestic and farm purposes. Water losses from the Coliban system were a frequent problem until the construction of Lake Eppalock on the Campaspe River and Wild Duck Creek in the Heathcote region in 1962. Its capacity is 312,000 ML. Lake Eppalock has extensive foreshore recreation facilities, including a motel, service and recreation clubs and water sport venues.

The non-urban land is often hilly to undulating with whipstick and box ironbark forests. The whipstick areas are north of Eaglehawk and the nearby Kamarooka forests have notable stands of grey box mallee. The major reserves are the Greater Bendigo National Park (2002, 170 sq km) and the Bendigo Regional Park (87.5 sq km). The northern part of the municipality is flat farmland, mainly pastoral with some irrigation.

Urban Bendigo had 82% of Greater Bendigo’s population in 2011, up 2% from 2001. Bendigo is Victoria’s third most populous provincial centre, after Geelong and Ballarat. It has nearby rural/residential areas such as Marong, Woodvale and Mandurang.

Greater Bendigo’s five leading employment sectors at the 2011 census were tertiary/service industry, headed by hospitals (5.9% of employment) and education (5.2%). 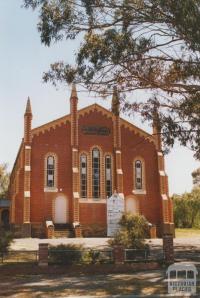