Loddon Shire (1995) is situated at its centre about 180 km north-west of Melbourne and 50 km north-west of Bendigo. It is reached by the Calder and Loddon Valley Highways, which both run out of Bendigo. There are also railways, roughly parallel to the highways. The Calder Highway passes through Wedderburn, the administrative centre of the shire, 200 km from Melbourne.

Some of the shire’s towns in the south, close to Bendigo, were originally gold-mining, but now rely on mixed grazing and cereal growing. Bridgewater has the sole remaining rural flour mill in Victoria, taken over by Laucke Flour Mills, South Australia. The main towns in the north of the shire are Boort and Pyramid Hill.

The shire was formed on 19 January 1995, by the union of Korong and East Loddon shires, most of Gordon shire, part of Marong shire and part of Bet Bet shire. The name, which has been used for the Loddon River and Loddon Valley, originated with the New South Wales Surveyor-General Thomas Mitchell during his Australia Felix expedition in 1836: he named the river after the Loddon River in Berkshire, England.

Most of the shire is served by the Waranga Western Channel livestock-water system, and Pyramid Hill is in an irrigation district supplied from Murray Valley storages.

Loddon shire’s census populations have been:

In 2011 general farming accounted for 26.1% of employment in Loddon shire and dairy farming 4.8%. Many original settlers had a Methodist or Presbyterian affiliation and in 2011 the Uniting church’s adherents were 13.4% of the population. 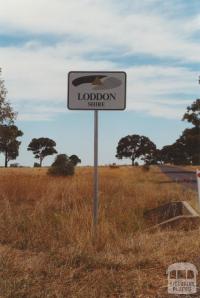 Historic sites of Woodstock on Loddon, 2001