In 1857 a railway line was opened between Melbourne and St Kilda, running along high ground to the south of the Albert Park lagoon. There was also a linear lagoon on the other side of the railway, occupying about a quarter of the area of Middle Park. Most of Middle Park is not more than 4 metres above sea level.

In 1876 Canterbury Road, beside the railway line, was made and in 1879 the foreshore road was made and named Beaconsfield Parade. Low lying areas were filled in. During the 1880s land was released for housing and the Middle Park railway station opened. Incomplete drainage systems caused subdividers to favour larger blocks than those in South Melbourne, foreshadowing the next century's preference for quarter acre sites. The Harold Street drain was of particular benefit.

By 1885 there were nearly 1400 pupils at the neighbouring Albert Park primary school, and two years later a primary school was opened in Middle Park. By 1891 it had 600 pupils. In 1916 it became Melbourne's first central school, continuing to year 8 until 1968. Notable pupils have included the Mott family (champion diver and champion swimmer), Justice Rae Else-Mitchell, Sue Calwell and Simon Crean.

In 1890 the Beaconsfield Parade promenade and the Middle Park baths were opened, boosting the area's popularity with visitors who were already attracted to the Kerford Road pier. The pier and Kerford Road are on the Register of the National Estate. The school is heritage listed. Middle Park primary school had 456 pupils in 2014.

Most Middle Park churches are in Richardson Street: Baptist church (1904), Anglican church (1891), Presbyterian church (1912) and the Catholic church (1928), most extensive of all, with a Carmelite Order, Kilbride College and Christian Brothers school.

Middle Park is a conservation area under the register of the National Estate, described as having mainly Edwardian dwellings, wide streets with mature trees and bluestone kerbs, and double storey shops in the area around the station. There are two fixed rail routes through Middle Park, along Danks Street near the foreshore (1925) and along the railway line, converted to light rail tram in 1987. The shopping centre near the station is set off by the Middle Park hotel (1889).

Middle Park’s census populations have been:

Middle Park’s occupied dwellings at the 2011 census were: 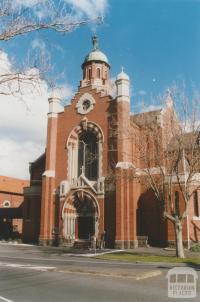 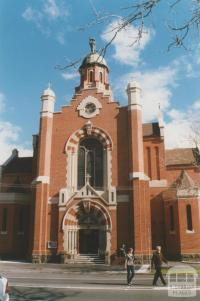