Upwey is a residential suburb in hilly surrounds 34 km south-east of Melbourne and 2 km west of Belgrave.

Until the turn of the nineteenth century Upwey did not have a separate identity. In the middle 1890s the part of the locality was divided into ten-acre blocks as part of the ‘Scoresby’ village settlement scheme, which extended northwards to Ferny Creek. Notwithstanding the Scoresby appellation, Upwey was known as Mast Gully, after several ship masts had been cut from a gully in 1850. (Mast Gully Creek and Mast Gully Road remain.)

In 1897 three sisters, the Tullidges, bought a homestead and named it Upwey, after the English village on the River Wey. They persuaded the Victorian Railways to approve a stopping place near their house, and the name Upwey was given to it. The name was adopted by common usage, the Upwey Church of England being built in 1904 (now in the neighbouring locality of Tecoma). The post office was built in 1911 in a newly constructed store. 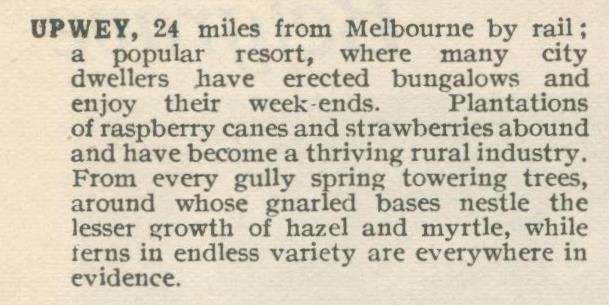 The town had a Progress Association hall and a fire brigade. During the 1920s Upwey was the site of the Union Church's annual gathering, the Convention. The open air preaching continued until 1950 when the Convention moved from the Upwey high school site to Belgrave Heights. More weekenders were built and a bowling green was opened in 1929. In 1934 the Upwey Primary school was opened, and a higher elementary school was established three years later. It became a high school in 1945, serving several Dandenong Ranges townships. Upwey's populations had rapidly increased, partly from wartime evacuees from the city deciding to stay, and weekenders were superseded by permanent residents. Bushfires threatened Upwey in 2009.

Upwey's shopping centre is near the railway station, away from the Burwood Highway. There are two recreation reserves, an Anglican church (1904,1957), a Baptist church (formerly the Belgrave public hall) and the Burrinja community centre (2011) on the site of the former Sherbrooke shire offices. The High and Primary schools adjoin each other and there is an Upwey South Primary school (1964) (247 pupils, 2014). Upwey primary had 80 pupils in 2014 and the high school had 773 pupils in 2014.

Upwey's census populations have been:

Reflections of the past: a photographic history of Belgrave, Upwey, Tecoma and Upper Ferntree Gully, 3 volumes, Belgrave, 1998-2005 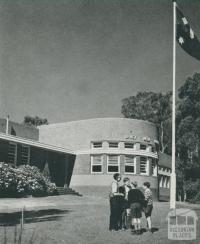