The shire encompassed the headwaters of the Yarra River as far west as Woori Yallock, 50 km east of central Melbourne. Travelling east, the shire ended near Matlock, on the crest of the Dividing Range, 100 km from Melbourne. Three quarters of the shire was forest, exploited for both timber and water supply. Domestic water was captured for both the Upper Yarra and Thomson dams (1957, 1983), the latter in Narracan shire.

Warburton had been a gold mining town and then a timber harvesting, farming and tourist place. A railway from Lilydale was opened in 1901, stimulating the development of Yarra Junction and providing the means for conveying timber from Powelltown and related products from the Britannia Creek timber-treatment works (1907). The O’Shannassy water scheme (reservoir and aqueduct to Surrey Hills, Melbourne) was completed in 1914.

Reticulated electricity came slowly to the shire. A private supply to Warburton was switched on in 1920, but extensions awaited connection to the State grid. It began at the Upper Yarra Dam site in 1949 and worked down the Yarra valley and its tributaries: Woori Yallock in 1952, Yellingbo in 1959 and Powelltown in 1961. Electricity supply to Warburton was important for the elaborate chalets and resorts and for entertaining patrons at the local cinema.

The eastern ranges were prone to severe bushfires. Events in 1926 and 1932 were capped by Black Friday in January 1939. Fourteen lives were lost in a timber mill at Matlock. Tramway mills in the forest turned out to be dangerous places, although many dugouts saved lives. After the fires dead mountain ash trees were salvaged and used to supply the war effort and postwar reconstruction.

In 1946 Upper Yarra shire was described in the Australian blue book:

From the early 1970s to 1991 the shire’s population more than doubled. Urban growth was marked, in Launching Place, the settlements adjoining Warburton (Millgrove and Wesburn) and Woori Yallock. Some farms were acquired for rural/residential living. Yarra Junction replaced Warburton as the shire’s headquarters.

Warburton continued to be a day trip destination with an extension to Mount Donna Buang for tobogganing on plastic raincoats in the snow season. The Chalet and the Seventh Day Adventists’ health resort had continued patronage, but younger generations went further afield to more modern facilities. Nevertheless, there was always a bit more money and better off people in Warburton compared with its neighbours.

Agriculture occupied just 4% of the shire’s land. Meat cattle grazing was the main farm activity, and in 1994 there were 5850 head.

Upper Yarra shire was amalgamated with most of Lilydale and Sherbrook shires in 1994 to form Yarra Ranges shire.

Part of the Upper Yarra Township, 1955 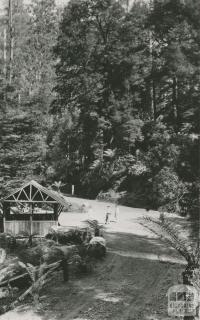