Vaughan, a former gold mining township, is on the Loddon River and is 12 km south of Castlemaine. It is agricultural, but partly surrounded by a State forest, and is about 100 km north-west of Melbourne.

Gold was discovered at Vaughan in 1853 as fossickers spread from the Castlemaine-Mount Alexander goldfield. The name was given as a compliment to Charles Vaughan, a pastoralist and Member of the Legislative Council for the Western Province, 1856-64.

Vaughan had a high proportion of miners who belonged to one of the Methodist churches. A Wesleyan school was opened in 1856. Within ten years there were also a court of petty sessions, two hotels, and a steam-driven quartz-crushing machine. When the Mount Alexander shire was formed in 1871 Vaughan was its administrative centre until 1890, when a shire office was opened at Campbells Creek. The Ball and Welch department store (Melbourne) had its origin in Vaughan in 1856.

Vaughan experienced a drastic loss of population during the 1890s, and the school closed in 1892. Even so, Vaughan’s description was recorded in the Australian handbook in 1903:

In 1914 the first part of a large public reserve was set aside, enclosing mineral springs and parkland. The reserve runs along the Loddon River and Fryers Creek, and is planted with exotic trees. The springs were found when gold sluicing took place in the early 1900s.

Vaughan also has a large historic cemetery with a Chinese section. Camping is available in the mineral springs reserve, and walks and fossicking are available both there and in bushland north and south of Vaughan.

Vaughan’s census populations have been: 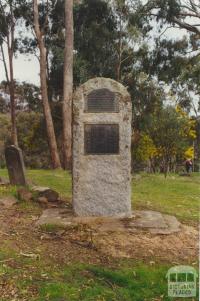