Wimmera Shire was one of fifteen municipalities which comprised the statistical Wimmera region until 20 January 1995, when they were amalgamated into six larger units. The original Wimmera shire, however, occupied most of the western Wimmera and a large part of the south-western Mallee when it was proclaimed on 4 March 1864. Its area was 26,260 sq km.

Between 1875 and 1888, as Wimmera farm selections were taken up and railway lines were extended north and west of Horsham, the newly occupied lands were constituted as shires and severed from Wimmera shire. Some shires were further subdivided and new shires created from them.

The shire’s farm areas participated in the general improvement of water supply services, beginning with the shire’s own water trust in 1886. From weirs on local streams, the water supply was strengthened with the construction of the Wartook storage (1887) at the headwaters of the McKenzie River in the Grampians. It was the first of several Grampians reservoirs which supply the Wimmera-Mallee domestic and stock water supply system.

Wimmera shire extended from the Grampians to near Warracknabeal, with the McKenzie River joining the Wimmera River at Horsham as its western boundary. The Yarriambiack Creek, flowing out of the Wimmera River, was its eastern boundary. (Both water courses flow northwards into Mallee lakes). The shire’s main transport corridors were the Western and Henty Highways and the railway to Adelaide.

In 1946 Wimmera shire was described in the Australian blue book:

(Most of the fruit growing was at Quantong, which later converted most orchards to dairying and pastoral uses). 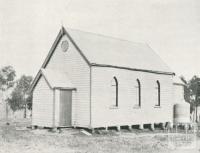 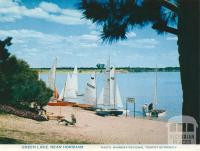